Why Am I Fat? Four Surprising Reasons 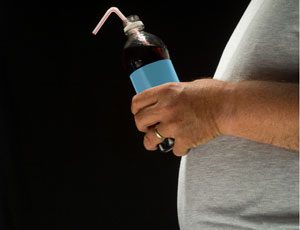 These factors might mean the difference between those who eat without gaining weight … and the rest of us.

Whatever fad diet books tell you, the single most important factor affecting weight gain is the ratio of calories consumed to calories burned. Eat more than you work off, and you’ll gain weight.

But in recent years we’ve witnessed a flurry of research showing that there’s more at work than this simple formula. We all know (and loathe) them: Those people who seem to eat and eat and eat, but never gain weight. Why do some people pack on pounds, while others subject themselves to rigorous diets and workout regimens only to struggle with stubborn belly fat?

The answer has a lot to do with that mystery of mysteries, the metabolism, which like everything is influenced both by one’s genetics and one’s environment. The environment, in this case, includes more than just nutrition and exercise; it includes sleep habits, stress and chemical exposures. Here’s a look at some of the factors scientists believe may be affecting whether or not we put on weight. (Oh, and while this may sound like an article ripped from a women’s health magazine, don’t be fooled: You won’t find miracle pills or quick-fix workouts as solutions to these causes of weight-gain. As with eating well and getting enough exercise, there is neither a great mystery, nor an easy solution to finding good health.)

While research hasn’t yet determined all the factors in the stress-weight gain feedback loop, there appears to be evidence that stress leads to weight gain — just as putting on a few pounds can lead to stress.

One recent study found that more than 56% of stressed-out adolescents were obese, versus 47% of the less-stressed. Previous research has identified a biological switch in mice that makes the body accumulate fat. Significantly, mice that were eating a healthy diet did not put on weight, even when stressed; those eating high-fat, high-sugar diets, however, were much more likely to gain weight when stressed. Another study showed that there’s a biochemical trigger in the brain that prompts mice (and possibly humans, too) to seek out comfort foods when under the kind of long-term chronic stress we all experience; not only that, but the same hormone primes the body to pack on belly fat.

What you can do:
Eat well, of course — and chill out. We can’t control every form of stress — remember the 40-hour work week? Turns out, that was good for us — we can reduce our stress levels.

Read a book. Take the afternoon to cook a (healthy, low-fat) family meal. Work in the garden. Take a walk. Watch the birds. Exercise. Get outside and play with the kids. … Do whatever you do to get perspective. It may help you slim down, too.

Cutting-edge sleep researchers are learning that our round-the-clock schedules may impact our health in surprising ways. While scientists don’t yet know why, studies continue to show that those who don’t get enough deep restful sleep tend to gain weight.

Whether or not losing sleep makes you feel hungrier and eat more food (some do, some don’t) something about losing sleep changes the metabolism. Faced with a sleep deficit, we metabolize more lean muscle and less fat. Even if we burn calories during exercise, we struggle to lose weight.

The result? According to one study, people put on three pounds in less than two weeks just by having their sleep interrupted. The results of sleep deprivation show up in as few as a couple nights without deep restful sleep. And BMI, the official measure of weight, increases steadily as the sleep deficit increases.

What you can do:
We all know what makes us lose sleep — too much to do, too much coffee (or alcohol), too much late-night television or video gaming, a little too much “quality” time with our Blackberries. We can’t control everything that wakes us up or takes away our sleep — the crying baby can’t be ignored — but we can control many of them.

How much sleep do you need? The Centers for Disease Control and Prevention recommends 7-9 hours for adults, while some experts have said 6.5-7.5 may be closer to the ideal.

What could be wrong with baby formula? The point here has more to do with the benefits of breast-feeding during the first months of life than the demerits of any particular brand of baby formula.

Why? That’s a mystery, though it may well have something to do with how the different nutrients and hormones alter a baby’s metabolism.

What you can do:
If you are able, give your child a good start by breastfeeding, in consultation (of course!) with your doctor. A German study found the prevalence of obesity in children aged 5-6 decreased significantly based on the length of time their mothers breast-fed them:

Never heard of “obesogens”? That’s because it’s a scientific term for chemicals that mess with the hormones that regulate our metabolism, and cause us to gain weight. In recent years, scientists have studied all sorts of substances — they call them “endocrine-disrupting chemicals” — that our bodies mistake for hormones. The endocrine system regulates the body’s reproduction, development and metabolism, and most research to date has focused on the reproductive and developmental effects of these chemicals. Just like hormones, they may change our bodies in ways both subtle and profound, even at minute concentrations. The timing of exposure is key, and most chemicals seem to cause the most changes when pregnant women or very young children are exposed. Several studies point to links between manmade chemicals and weight gain. Here are a few:

Bisphenol A
This common chemical, which is used in a variety of plastics and in the lining of food and drink cans, can leach into foods (or directly into the bodies of babies chewing on teethers or toys) and the Centers for Disease Control and Prevention has found it in about 9 of 10 Americans tested. The Food and Drug Administration and the chemical industry stand by its safety, but a growing body of evidence by independent scientists has persuaded several governments (Minnesota, Chicago, Suffolk County, N.Y., and Canada) that it should not be used in children’s products. Some of that research suggests that Bisphenol A — a synthetic estrogen — makes lab rats pack on extra weight, regardless of their diet. In humans, it has been linked to heart disease, diabetes and other symptoms of metabolic syndrome in humans, possibly by interfering with a beneficial hormone. To avoid Bisphenol A, avoid No. 7 plastics, use a stainless steel reusable water bottle, limit your consumption of canned foods and drinks, don’t microwave foods in plastic and look for products explicitly marked “BPA free.”

PFOA and PFOS
Perfluorooctanoic acid and perfluorooctane sulfonate are the chemicals that makes nonstick pans, grease-resistant paper and stain-resistant clothing, carpets and furniture withstand oils. We’re exposed our entire lives, and the exposure in the womb may be the most important, according to one study. Several studies have shown that the chemicals lead to lowered birth weight, but one showed that the initial drop in birth weight is followed by a rapid gaining of weight that is associated with obesity throughout life. To avoid these chemicals, think twice before buying stain-resistant and nonstick products (cast iron is one good alternative in the kitchen) and limit your intake of fast foods, microwave popcorn and other foods that may be wrapped in grease-proof paper.

Phthalates
Another common chemical, phthalates are found in soft plastics, fragrances and many other consumer products. The U.S. recently banned the use of several phthalates in children’s products, because of evidence that early exposure affects the normal development of boys by reducing testosterone levels. One study showed that adult men with the most evidence of exposure to phthalates had fatter bellies. To avoid phthalates, avoid No. 3 plastics, and scrutinize the ingredients of products for “fragrances” or the acronyms DBP, DEP, DMP, DEHP, BxBP or DMP — all of which signal the presence of phthalates.

Dioxins
Formed as a byproduct of burning, dioxins are common and known to be harmful at minute levels. (Whereas the Environmental Protection Agency measures most pollutants in pounds, it measures dioxins in grams.) Dioxin rains down after being emitted by smokestacks, tailpipes and fires, and it contaminates farms, leaving us to be exposed when we eat meat, dairy and fish products. One study showed that those who had been exposed to the highest levels of dioxins were five times more likely to have metabolic syndrome, a collection of metabolic conditions that includes obesity, glucose intolerance and hypertension. To avoid exposure to dioxins, moderate your intake of beef, pork and dairy products, and choose lean cuts of meat to avoid dioxin stored in fats.

Pesticides
Several pesticides are known or suspected to be endocrine-disrupting chemicals. Among the suspects is tributyltin, which was used in anti-fungal boat paints and to kill pests on some food crops, and which may trigger obesity. On golf courses, workers who handled the pesticide tricholorfon had an 85%-250% greater risk of developing diabetes, depending on how frequently they handled the chemical. Children born to mothers with higher levels of the pesticide hexachlorobenzene in cord blood were “significantly more likely to be overweight and obese” by the age of 6. In a recent study, rats fed water laced with atrazine, a weed killer commonly used on U.S. corn crops (but banned in much of the world) gained 5%-10% more weight than rats that weren’t exposed to the chemical. Those fed weed killer and a high-fat diet gained the most weight, but even rats that ate a healthy diet ended up about 5% fatter if they drank the tainted water. To avoid these and other pesticides, avoid using insect and weed killers around the home, and avoid foods with the most pesticide residue.