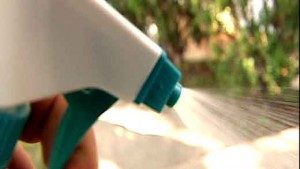 Pesticides and household chemicals seep into our skin and filter through our lungs every day. The exposure to toxins meant to kill pests puts human health in danger and those toxins have long been linked to causing cancer.

Now, a new University of Missouri study out this week even connects pesticides to Parkinson’s. And the problem with pesticides is that it’s hard to track their impact on our health since none of us live in a bubble.

“Like with drug development, it’s a process of continuous improvement,” stated Penelope Fenner-Crisp, who worked in the EPA’s office of pesticide programs and serves on Virginia’s Pesticide Control Board.

More than 20,000 pesticides are registered with the feds for food, bugs, and weeds.

“There are certain kinds of pesticides that meet the definition of the law that can be used in organic gardening.” she explained.

Fenner-Crisp continued, “There’s a very strong effort going forward to find new products that are more tailored to the pest and less tailored to general impacts on human beings.”

Some studies show only 5 percent of pesticides actually reach their target. The rest drifts into the air or seeps into the soil and water. Exposures to the chemicals have been connected to cancer and damaged immune systems. Fenner-Crisp says the label is the law and safely using pesticides can reduce some of your risk.

“You want to be sure you’re handling it in such a way that you don’t endanger yourself, your family, your pets, or those things you don’t want to have erased,” she explained.

She sells pesticide alternatives at the shop in Charlottesville and says gardeners can use natural fertilizers like bat guano or plant-based insecticides like pyrethrum. “It’s literally a juice from a flower that will actually kill insects, but it’s not toxic to us, pets, babies, etc,” said Mattson.

But it’s nearly impossible to not track pesticides inside your home. So, Mattson recommends kicking off your shoes at the door to keep those toxins outside. “The inside air quality in your home is usually worse than it is outside – and one of the largest components of that is pesticides that we literally track into our house,” she stated.

In addition, oxygenated bleaches or homemade cleaning products can cut back on the chemicals your body absorbs on a daily basis.