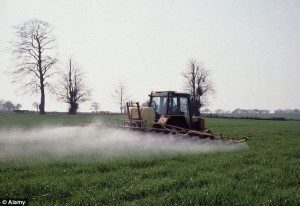 A safety watchdog has issued an alert about two food crop pesticides, which may damage the brains of babies in the womb and children. The suspect chemicals are used around the world on farms growing grapes, strawberries, lettuce, tomatoes, tea and oranges. They are part of a new group of pesticides called neonicotinoids, which are also used in some flea treatments for cats and dogs.

Experts at the European Food Safety Authority (EFSA) have found there is good evidence that they can damage the developing human nervous system – particularly the brain. The harmful effects on brain development were similar to those caused by nicotine found in tobacco. Such a finding suggests these chemicals are a particular threat to developing babies and children by damaging their ability to learn, which could limit their achievements in school and later life.

As a result, the European experts are recommending that the residue levels that are allowed on food crops should be lowered as a safety measure. The experts are also calling for a comprehensive new testing regime to understand whether other chemicals in the same group could have the similar harmful effects. The pesticides – Acetamiprid (ACE) and Imidacloprid (IMI) – belong to a new class of insecticides called neonicotinoids that are widely used to protect crops from insects and domestic animals from fleas.

These chemicals have been at the centre of concerns about a danger to bees, which are vital to pollinate food crops. However, this is the first time that concerns about harm to human health have prompted demands for new safeguards from an official watchdog.

Research on the harmful effects of the pesticides have been assessed by EFSA’s Panel on Plant Protection Products and their Residues (PPR). One study with rats showed that offspring exposed to imidacloprid suffered brain shrinkage, reduced activity of nerve signals controlling movement, and weight loss. Another rat study found that acetamiprid exposure led to reduced weight, reduced survival, and a heightened response to startling sounds.

EFSA said: ‘The PPR Panel found that acetamiprid and imidacloprid may adversely affect the development of neurons and brain structures associated with functions such as learning and memory. ‘It concluded that some current guidance levels for acceptable exposure to acetamiprid and imidacloprid may not be protective enough to safeguard against developmental neurotoxicity and should be reduced.’ This will mean lowering the acceptable residue levels that exist for food, such as fruit, vegetables and tea.

Georgina Downs of the UK Pesticides Campaign said it was astonishing that the pesticides had been approved for use on food crops without thorough testing to establish any harmful effects on the human nervous system and brain. ‘Neurotoxicity investigations, including developmental neurotoxicity, should have always been included in routine toxicology studies in relation to any pesticide and pesticide product that is considered for authorisation,’ she said. ‘How can it be established that such pesticides do not have neurotoxic effects if they are not tested to find out?’ She added: ‘It has always been astonishing to a campaigner like me to know that neurotoxicity investigations in general are not already included in routine toxicology studies prior to the approval of pesticides. ‘Especially considering that many adverse effects reported by people exposed to pesticides is neurological effects.’ She welcomed the fact that EFSA is now calling for a new testing regime for pesticides. ‘The UK Government, and the EU more widely, must now as a matter of urgency secure the protection of people in the countryside by prohibiting the use of pesticides in substantial distances in the locality of residents’ homes, schools, playgrounds, etc. especially in relation to the protection of vulnerable groups,’ she said. ‘Considering the massive health and environmental costs of using pesticides it makes clear economic sense to switch to non-chemical farming methods. ‘It is a complete paradigm shift that is needed, as no toxic chemicals that have related risks and adverse impacts for any species should be used to grow food.’