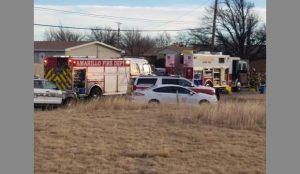 Four minors are confirmed dead in what Amarillo fire officials are describing as an accidental poisoning at a northeast Amarillo home.

Amarillo Fire Department Captain Larry Davis said that there are, “a couple more that are not out of the woods yet,” and are still being treated at a local hospital.

Davis said emergency responders were called out to a carbon monoxide poisoning call at a home located at 1301 Carolyn at about 5 a.m. Monday but discovered that a lethal gas created by a pest control chemical exposed to water had likely sickened the home’s residents.

When responders reached the home, one person inside was unconscious and unresponsive and nine other people were sick.

The other nine were transported to a local hospital where three later died, Davis said in multiple interviews Monday morning.

All four of the deceased were believed to be residents of the home, but it was unknown whether all of the people inside the house were related, Davis said.

“The initiall call came from someone who showed up early (Monday) and saw everyone was sick,” Davis said. “It is unknown if the call was from a friend or relative.”

Davis said first responders initially checked for, but did not find carbon monoxide in the home. They discovered that an occupant of the home had tried to fumigate the house using a fumigant or pesticide that contained aluminum phosphate, a chemical that, when mixed with water, creates phosphine gas which can cause respiratory failure.

It was unclear how long the home’s residents had been exposed to the poisonous gas.

“It’s a very lethal chemical,” Davis said. “It causes pulmonary edema, and basically the lungs fill up with fluid. We don’t know that that’s the cause of death so far, but that’s one of the more severe symptoms. It took us a long time to identify the chemicals.”

Davis said the one of the home’s occupants had reportedly tried to crawl under the home to wash some of the chemicals off, triggering the chemical reaction.

Names of the deceased were not available.

The home at 1301 Carolyn is owned by Peter Balderas according to the Potter-Randall Appraisal District.

Davis said he did not know whether the people inside the home owned or rented it.

In addition to the people inside of the home, two members of the police department, seven fire fighters and one person from American Medical Response were taken to the hospital to get checked out. Davis said the first responders were taken as a precaution and showed no signs or symptoms of poisoning.