There are always discussions as to which feeder is “the best”, but like everything else in beekeeping, there is no one best solution for every situation and location. I have taken the most popular feeder options and rated them in different categories. I make no implication that categories are of equal importance, but leave it up to each beekeeper to decide importance of each. Feeders are rated in comparison to each other on a scale of one to five, with one being the worst, and five being the best. Keep in mind, these are my personal opinions and views, yours may be different. 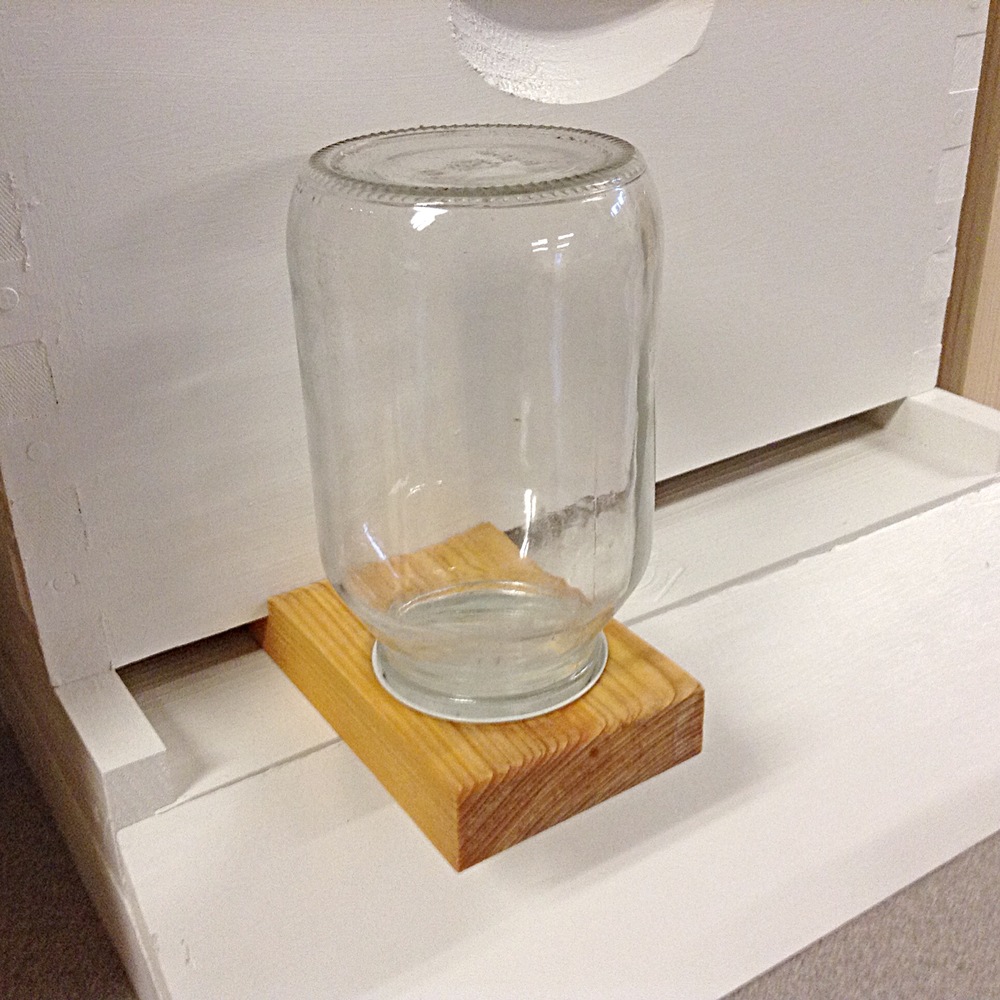 Boardman feeders are the simplest to use, no manipulation of the hive is necessary.
Robbing and Ant issues:

Although ants seem to be less of an issue as the bees tend to keep them away from the lid of the jar, Boardman feeders are the worst when it comes to robbing. It is impossible to install a Boardman feeder without spilling some syrup on the hive or ground, which is an attractant for robbing bees. If you use any essential oils or Honey-B-Healthy, it becomes even worse.
Bee Access:

Being external to the hive, the weather has to be warm enough for the bees to fly for them to get to the syrup. This can be a real downfall in the early Spring when the weather is bad and your bees need the feed.
Bee Drowning:

One good aspect of the feeder being outside the hive, is that it is next to impossible for bees to drown. Even if it does leak, the bees can avoid it.
Hive Inspections:

Being located at the entrance, it does not impede hive inspections.
Capacity:

Boardman feeders are mainly used with quart mason jars, but 5lb. glass honey jars can be used. Betterbee does sell a plastic Boardman-like feeder that has a much higher capacity.
Cost:

Boardman feeders are relatively cheap when you supply your own mason jars.

Division board feeders require a little more effort to use. You have to open up the hive to install and fill them. One trick is to put the feeder right against the side of the hive and when you go to fill or inspect, slide the super above it over enough just to expose the feeder.
Robbing and Ant issues:

Since the feeder is inside the hive, the bees can easily protect it from ants and robbing.
Bee Access:

Being internal to the hive, the bees readily hav access to the feeder. I do question how likely it is that the bees will feed from it while clustered, like the inverted feeders, especially if it is placed next to the hive wall. Since it is located in the core of the nest, it is the least susceptible to freezing as well.
Bee Drowning:

Division board feeders are by far the worst when it comes to bee drowning. You can use floats or ladders to help reduce the drowning, but it can become a chore at times keeping these devices working properly.
Hive Inspections:

Most inspections are usually not hindered by division board feeders.
Capacity:

Division board feeders cost ~$5 each. 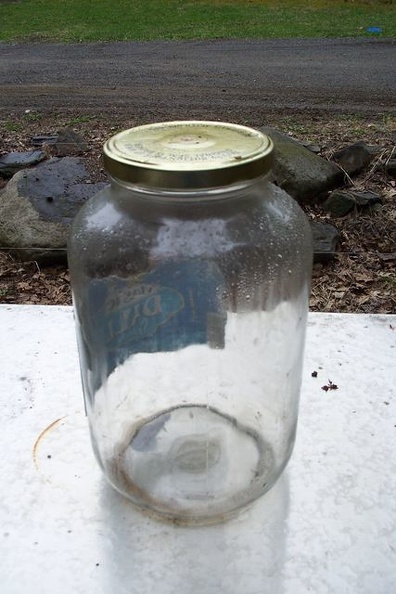 The inverted Jar/Can is not much more work than the Boardman feeder. A gallon glass jar full of syrup is still quite manageable even for those who are not strong. It usually does require the use on an extra empty super when placed inverted on the inner cover hole, or frame tops.
Robbing and Ant issues:

Like the Boardman feeder, the exposed access to the syrup is minimal. But the added advantage with the inverted jar/can is that access is only from within the hive, so the bees can easily guard and protect it.
Bee Access:

The inverted jar provides access 24 hours a day, 7 days a week, regardless of temperature. The bees can cluster right up to the bottom of the feeder and continue to feed without breaking cluster. The reason I gave the division board feeder a slightly higher ranking is that the inverted jar/can is more likely to freeze since it is not in the core of the hive like the division board feeder. This really isn’t an issue in my mind though. If the weather is cold enough for the extended period of time that would be need to freeze the syrup, it is most likely not the time to be feeding syrup and adding additional moisture to the hive.
Bee Drowning:

Drowning is not an issue as the bees can’t get into the syrup. Yes there is the rare occasion that you don’t get the lid sealed properly and the inverted jar/can leaks out and soaks the bees under it. This is more likely with the friction top cans than glass jars. I personally prefer the glass jars over cans because the lids are easier to deal with and you don’t have to deal with rust.
Hive Inspections:

Hive inspections aren’t too bad. Yes you have to remove the empty super and feeder, but most of the time the feeder is less than half full, so it is easily removed and set aside.
Capacity:

The Gallon glass jar doesn’t hold as much as the pail feeders or Miller-type hive top feeders, but usually provide enough syrup to last a while, but not long enough to let it get too moldy. You can always put more than one on a hive at a time if needed.
Cost:

FREE!!!! At least the gallon glass jars are. You can get them from your local deli. I guess you can get used paint cans too, but I don’t think the wife would go for putting them through the dishwasher like the pickle jars. One note of caution, only use glass. The plastic ones are too flimsy and will leak on the bees. 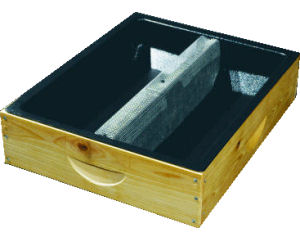 The hive top feeders are the biggest and bulkiest to deal with. Like the division board feeder, you need to transport the syrup in a seperate container, only bigger since it holds much more syrup, and you have to lift these larger containers higher to fill the hive top feeder. Miller-type feeders are best when used for making comb honey or feeding honey back to cut-outs.
Robbing and Ant issues:

Robbing can be an issue if you don’t have a tight sealing lid on top. However, ants seems to be the bigger problem, as they can get through smaller cracks than bees, and there is a large pool of syrup that the bees can not patrol. It can sometimes be a futal effort trying to stop ants from getting into a hive top feeder once they find it.
Bee Access:

Hive top feeder are only slightly better than the Boardman feeders. They require the weather to be warm enough for the bees to freely move and break cluster to feed. This may not be an issue for folks in the South, but this is a real drawback for Northern beekeepers in the Spring when the weather only warms up enough in the early afternoon. Spring is the time of the year when the bees need the syrup the most to prevent starvation and they may only be able to get access to it for a few hours and depending on the weather, may not have access for days or weeks at a time.
Bee Drowning:

Like the division board feeder, one has to work at preventing drowning with the hive top feeder. You have to limit the bee access to the pool of syrup by some type of screen or plastic excluder. A ladder or float is also helpful at times. You have to keep an eye on these restriction devices, a simple bent corner on a screen can lead to massive bee drowning. I guess there is also the slight possiblity of damaging the hive top feeder and a leak devloping that dumps large amounts of syrup onto the bees.
Hive Inspections:

Hive inspections definately need to be planned around feeder refilling as it is next to impossible to remove a feeder that is more than half full without spilling, which increases chances of robbing. It can be real troublesome if you need to take a quick check or the bees aren’t consuming the syrup as fast as you anticipated.
Capacity:

Hive top feeder capacity differs by manufacturer, but most hold between 2 and 3 gallons.
Cost:

Hive top feeder have the highest cost of all feeders. They range in price from $12 to $35 depending on the design. 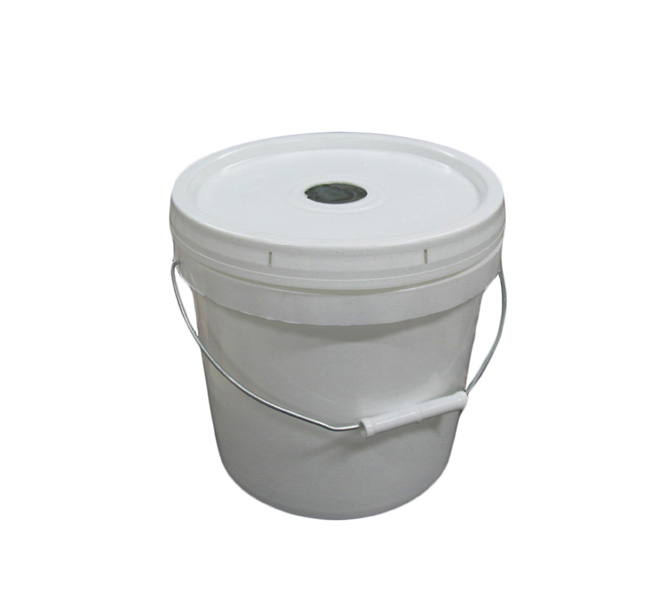 For the most part, the pail feeder is quite similar to the inverted jar with the obvious differences of capacity, weight, cost and associated effects of these differences. The one not so obvious, but perhaps the biggest difference is the fact that the pails are made out of plastic. Plastic pail feeders should not be used when there are large fluctuations in daily temperatures as the expansion and contraction of the syrup causes the pail to flex and pump the syrup out onto the bees.