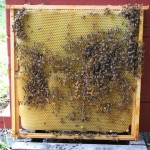 The big craze over at Beemaster is switching to only medium depth boxes. Yes there are some advantages like uniformity and lighter weight, but there are also some things I consider disadvantages, at least to me. One is more equipment and therefore more cost. One can also debate if there is any downside to breaking up the brood area more. But perhaps the biggest downside to me is the added work (and time) in doing a full inspection. 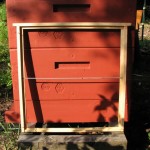 Being the non-conformist that I am, I took the thing that bothered me the most and went the opposite direction. Even with deep supers, to do a full inspection of a 2-story deep colony, I need to go over 20 frames and remove one box to get to the other. So I decided to give double depth deep frames a try. Although each frame is heavier, they are still lighter than lifting even a medium box and there is no need to remove any boxes to get further down in the brood nest. Granted, if you need to move your hive around, this is not a solution for you. I’m doing this on a hive at my home which I don’t move.

I know large deep frames are not new as Dadant used them. In fact, I used the Dadant frame as the inspiration for my design. I also must give credit to Michael Bush for the photo of the Dadant frame on his website.

Two concerns that I had with the double deep frames where comb support and comb flatness. 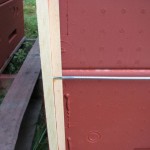 The comb support was address by putting a steel rod across the middle of the frame. Remember those free corrugated plastic election signs I use as starter strips? Now I have a use for the wire stands from these signs too 🙂 The rods not only support the comb, but would keep the frame rails from bowing. This is the same method used by Dadant. As for the comb flatness, I had experienced from my top bar hives that the bees will build a natural arc in the comb as they go. In fact, on the TBHs they will end up on the adjacent top bar if the hive is wide enough. So I decided to give comb guides a try. The Dadant frame appears to have triangular shaped guides around the inside of the frames. I had a pile of unused wedges from wedge top frames that I cut to fit and glued in. 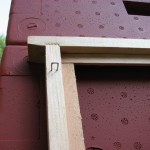 I sized the frames to fit in two stacked deeps as I didn’t want to make new boxes for this experiment. I started building Hoffman style end bars, but ended up switching to flat end bars and staples for spacing. I find the Hoffman style get packed with propolis over time and need scrapping. I find it somewhat challenging to hold a regular deep in one hand and scrap the propolis off with the other, I can’t imagine trying to do that with these. I’m interested in seeing how the staple spacers work and if there is significant less propolis to deal with, I might even switch to them on all my new frames.

I decided to introduce one of these frames into a hive to start. This way there would be frames of comb on either side to help guide the bees in the comb building. At first inspection I was a little worried as they not only where building comb from the top guide, but also from the metal rod. But it turned out not to be an issue, as the comb guides along the side of the frames worked like a champ and everything lined up when they met. I had put this in a hive that was honey super cell frames since it would have uniform comb on both sides. They did draw out mostly drone comb, but this was expected since they had none with the honey super cell. Next year I will continue adding more of these frames and hopefully get the hive migrated over completely.