Reduce the need to even use a bee vac by using swarm traps. Our bee vac is by far the easiest on bees and beekeeper, but you can ease the stress even more by proactively setting out swarm traps. There are many options out there for swarm traps, but if ease and less stress is high on your priority list, use traps that have frames. Using non-frame based traps like the compressed paper fiber pot type or even plain boxes still leave the stress and hassle of “cutting” the colony out of the trap and relocating it to a traditional hive. Over the last few years we have been experimenting with trap sizes and designs and have come up with one that we believe works quite well. 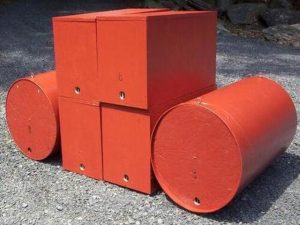 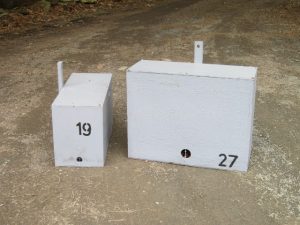 During the summer of 2012, we put the design to a test. We set up a pair of traps in 11 different locations within a 50 mile area. Each location had a 20 litre and 30 litre trap place within 2 feet of each other. Each trap was newly built (never had bees in it) and contained 4 foundation-less frames, 1 frame of old brood comb, and one vial of our swarm lure paste. Eight of the 11 locations caught swarms, with one location catching two. Of the 9 swarms caught, 8 where in the 30L trap and only one swarm chose the 20L trap. Although the results may seem to be pretty conclusive, I must warn that I would not consider this test a valid scientific experiment. Traps orientations were dictated by the location. It was not possible to maintain consistent entrance direction, height, or relative position to other trap between the locations. In 2013, an additional experiment was done to get an idea of the effectiveness of swarm lure verses drawn comb. Pairs of new 30L swarm traps where put at each location. One had a vial of swarm lure and 5 foundation-less frames and the other had one old brood comb and 4 foundation-less frames (no swarm lure). Of the 11 locations, eight caught swarms and all chose the old brood comb over swarm lure. After many requests, we are now offering swarm traps with lures for sale in our Online Shop. 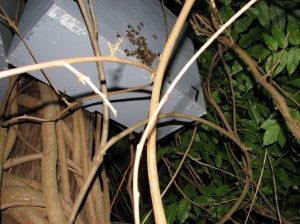 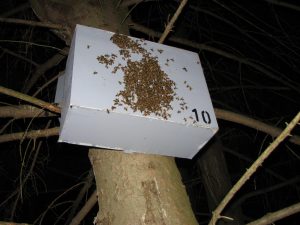 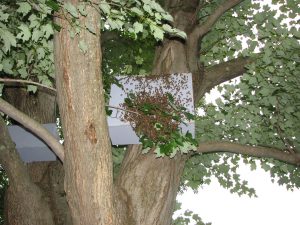 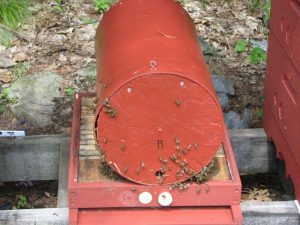 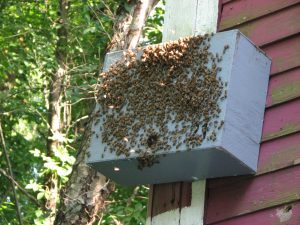