We first shared the barrel top bar hive in 2007.   Since that time there are a few copy cats claiming their original design.  Take note that they never provide pictures with an established colony like we do.

Featured in the Jan/Feb 2011 issue of Backwoodsman Magazine 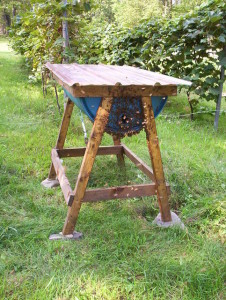 TBHs have been used throughout the world for many years. It has only been the last few years that they have started to catch on here in the USA. Mainly due to the desire from hobbyist beekeepers to get back to “natural” beekeeping, but also do to the relative low cost of using TBHs. TBHs require no special equipment to be purchased and can be constructed from materials that are locally available.

TBHs are easy to construct and there are no hard fast dimensions that need to be adhered to. I wanted to take it a step further and come up with something that could be built with limited use of tools and time.

I started with a plastic 55 gallon drum. These can be easily procured cheaply, or even for free as I did. From one barrel you can make 2 hives. I started by marking the barrel to cut it in half lengthwise. Although the barrel had a seam that would make it easy, I wanted to use the bung holes for entrances, so I ended up marking out my own lines. It is possible to cut the barrel with a handsaw, but for the sake of time, I used an electric sabre saw.

Once the barrel was cut in two, I built a box out of 2″x3″ lumber to fit snugly around the barrel half. This frame would act as a stiffener preventing the barrel from warping out of shape. It would also act as the support for the top bars. My original concept was to extend the front and back sides out from the hive as can be seen in the un-assembled picture. The ideas was that the hive could be set on concrete blocks to support it at a reasonable work height for the beekeeper. This was quickly abandoned after more thought, as it would require 12 (3 for each corner) cement blocks and any moving of the hive would be extremely difficult.

Next a set of legs where added. I tried to keep the legs from not extending out to far from the barrel and becoming a trip hazard while working on the hive. They also had to avoid covering the bung hole that would be the entrance. I made the top bars out of 3/4″ rough cut pine (1″ actual thickness) and made them long enough to extend to the outside edges of the support frame.

I also took the simple route for the cover and used corrugated metal roofing. I picked this up from the Cower TBH design and it works well. It is very light and easy to work with. You can either tie it down with rope or just set a couple of rocks on top as I do. Since it is corrugated, there is plenty of ventilation as well. One sheet from Home Depot was big enough to make covers for both hives.

I have finally gotten 5 concrete hives finished and filled with bees. The bees seemed to accept the new hives with grace and good speed. It took time to get them built because of finding a competent person to do the work, find the supplies, etc. (That is not an easy task in another country like Honduras). The cost of the new hives is <25% of an equivalent wooden hive capacity. It is even cheaper than the plastic barrel hive (although not by much). I am trying another hive that will be made by plywood covered with fibreglass. This will be more expensive but much lighter. 🙂

I tried the mold type – built a mold and then plastered the concrete on the outside over a mesh. Couldn’t get the mold out so had to go to plan b for the next 4 hives. We used a very thin, fired brick that is used for making stoves. Then it was plastered. The hives were heavy but, as the guy helping me said, “you don’t have to move them often – once??” That is actually part of the appeal. No one can move them (steal). We didn’t have a wheelbarrow but that would have been plenty good enough to move them.

The other option is to build them situ with adobe and then plaster with a cement based plaster. The “brick” type was actually quite good. The guy building them was able to build two or three a day once he had the first one done. We used a “poured” base made from a metal frame and covered with mesh. Not sure if we needed so much reinforcement. There is certainly an easier way (I think) to make that base. The cement hive was less than $50.00 USD complete (top bars, foundation, roof, etc.). Will see with time how the bees settle in. First week they looked great.

Capacity was about 115 – 135 litres. They were deeper than a langstroth hive but the width would accept a langstroth frame if needed.

More from Bryan in Honduras

More wonderful photos and ideas from our friend Bryan Butler in Honduras. Thanks Bryan!

Here are few shots of various things. Having a man make a full size fibreglass hive. Will see the cost and so forth when he is done. He is making a mold so that should mean a faster turn around time for him. As well, they are much easier to move and place. However … much easier to steal. The concrete ones will never be stolen. The bees basically filled up the whole entrance of the barrel hive with propolis at first. However, the last two days as the first brood is hatching, they are enlarging the entrance. I have about 11 barrel hives ready to go. Will try and fill them from the trap hives next week – finally getting possession of some land to put them on – where I can take care of them myself.

Thanks for your interest.
Peace,
Bryan